Why D&D is Great for Young Writers 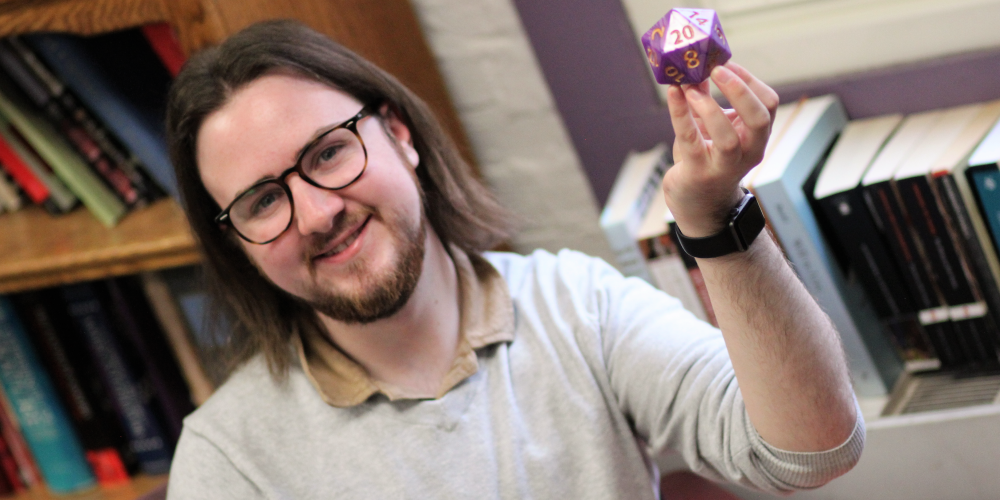 Your ally, confident in their acrobatic abilities, leaps across the ledge and makes the one in a million mistake of loosing his grip. In a flash you quick draw your arcane focus, but can you cast the feather fall enchantment before he's a puddle on the bottom of the crevice?

You have been making small talk with the vault guard for a good while now and finally you can see your words infused with insidious magic have taken a hold of him as evidenced by his suddenly wild eyes darting to and fro. He can't tell ally from foe and suddenly bolts for the door. As you signal your fellow miscreants you smile knowing that the no one stands between you and treasures beyond your wildest dreams.

With the last of her energy she heals your broken body and you wake with a start. All around you your merry band of adventures lay beaten and unconscious. You are the last one standing and the levitating orb of flesh and eye stalks laughs maniacally. It seems as if all hope is lost, but you know this beast is on its last legs so to say, and if you can best it you have enough healing potions to stabilize your team. The odds aren't in your favor, but that doesn't stop you from raising you blade and charging forward with a mighty cry.

If you're a writer, you should be playing Dungeons and Dragons. With adventure, wish fulfillment, intrigue, and built in tension, D&D is a game that facilitates storytelling, and writers who participate are guaranteed to walk away with a unique perspective on character design, world building, and writing as a whole. It’s also just a fun pastime that provides an excuse to get your friends together for a few hours to play a game and eat snacks. The problem for some is that D&D is a game, but don’t let it be confused for Monopoly or Sorry. D&D is much more fulfilling than your average board game like Monopoly or Sorry. It is also more difficult, and may be confusing for new players. However, with the right group of people the learning curve is no issue at all.

You may be asking why D&D is a good game for writers. To answer, I must first explain some of the basics of the game. D&D is a TTRPG, or tabletop roleplaying game. One person is the designated Dungeon Master or Game Master (DM or GM). This DM is responsible for facilitating the gameplay. They create the story, play the background characters, create and control the monsters you fight, and decide when a player fails or succeeds at any given task. the players are responsible for just one thing: their characters. They get in character and talk to the other players and DM as if they were really the character they portray. Underneath all of the role-play there are a set of rules the DM and players must follow (how much damage they can do, how far they can move in a turn, how skilled they are, etc.).

These three elements, the role of the DM, role of the player, and the rules, provide a unique and fulfilling experience for writers. First, let's look at players. As a player, you are responsible for creating your own character. While this involves mechanical elements like what job you want to fulfill in your group, it also includes backstory, alignment, goals, and aesthetics. This is a writer's opportunity to practice good character design, especially for protagonists. As a writer, you're creating characters all the time, so the unique aspect is what comes next: playing your character.

As writers, we attempt to put ourselves in the shoes of the people we create, but D&D takes that a step forward and asks you to set yourself aside and truly inhabit the character you play. It demands that you make decisions as they would by staying true to your in-game persona over trying to "win," even when these decisions are objectively bad ones. Sometimes, the most fun a player can have is to submit to the flaws of their characters only to grow and surpass these flaws a few sessions later. Inhabiting these personas across multiple game sessions also allows us as writers to see how character development can happen. It can also highlight the weakness in our character writing when we see how some of the details we added don’t hold up over time. It is for all of these reasons that you walk away better at character design after you play D&D.

As a DM, the list of skills you get are abundant, and writing is one of the chief skills among them. While players make specific protagonists, the DM needs to create funny and memorable side characters and intriguing and challenging villains. He or she is responsible for coming up with an engaging plot, a plot that needs to flow and change on a dime based on player interaction. You will either learn to write a story that is resilient enough to survive the players crazy exploits or become skilled at adapting your stories quickly. Most importantly, just like players learn their strength and weaknesses in character creations by playing their characters, as a DM, you learn your strengths and weaknesses in world building as your players run rampant in the lands you created. Players will want to explore every aspect of your world, requiring you to flesh out every detail ahead of time or on the spot.

And of course, both players and DM’s are bound by the rules. If someone wants to climb a ledge, they need to roll a die and add how strong they are to the result. If they fail the roll, they don’t climb the ledge. This makes it so no player or DM will know just what will happen next. When writing a book, comic, show, or movie, the writer is in full control of the plot. That is not the case in D&D. You can have all the grand ambitions you want, but the number on the die is what determines your fate. This chanciness pushes you to have your characters deal with failure and continue to try to succeed when the world is against you. Failing is an important part of every story, and D&D bakes failure into the mechanics.

At its core, lack of control is what makes D&D so unique. Players can only do what the DM allows, DM’s can't control the players, and both are bound to the rules. It is not often you get an opportunity to participate in collaborative storytelling and it makes for a unique story you won’t find anywhere else. And if medieval fantasy isn't your cup of tea, there are hundreds of different ttrpg’s with all kinds of genres for you to experiment with.

Want to write a breathtaking fantasy adventure on the scale of Lord of the Rings or Eragon? Try playing D&D in the forgotten realms setting. Want to play in a hardboiled steampunk setting with all your pulp tropes like murder mysteries, train heists, and noir? Then look into the Ebberon setting.

If you are a fan of the monster-of-the-week genre (Supernatural, Buffy the Vampire Slayer, Scooby Doo, Gravity Falls, X-Files) then the Monster of the Week system may be more to your liking.

Want to start with something free? try Lazers and Feelins for a sci fi adventure, Everyone is John for crazy modern day hijinks, or Honey Heist if you really want to play as a band of bear rogues.

Ttrpg's are a great way to write like never before while exploring new and strange worlds with friends. Choose the system that best fits your needs and explore this retro combination of play and storytelling, and you will soon understand why this cult classic has made a modern comeback in a big way. And, if this is all overwhelming, you can start by listing to D&D podcasts that are master of storytelling in their own right such as Dimension 20, The Adventure Zone, and the infamous Critical Role.