Lisa Ankrah is only 15 years old, but she’s got her wits about her. The bookish tenth grader enjoyed the contentious conversations in the weekly symposia, part of this year’s Upward Bound program.

“It’s controversial as opposed to high school where everything is hush-hush,” said Ankrah, a student at Perth Amboy High School. “The attitude is more like, ‘We’re not gonna baby you.’” 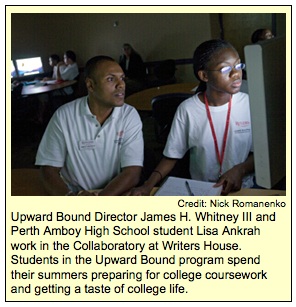 A July symposium saw the Upward Bound students examining Barack Obama’s presidential candidacy in the framework of “deracialized” politics. The talk was controversial, and symposium moderator, Joel Plummer, did not shy away from intellectually challenging topics.

The discussion, and most of the coursework students take during their summer residential program, is unlike most lessons in high school, students say. And that is what James H. Whitney III had in mind when he became director of the Upward Bound program last year. The federally funded TRIO program, launched at colleges and universities nationwide in 1965, has its roots in the federal Higher Education Act.

The Upward Bound program now has the benefit of support from Rutgers’ Office of Undergraduate Education. Whitney says that support has led to a richer experience for the 112 students in the program, 78 of whom lived on the College Avenue Campus for six weeks this summer. They ate together, went to the gym together, and traveled to Sandy Hook, Manhattan, and Washington, D.C. together. Their experience was made much more robust and dynamic with the additional support the program has received, Whitney said.

“We have tech support, a budget office, a web designer ... we’re a functioning unit,” Whitney said. Prior to the reorganization, which took place as part of Rutgers’ comprehensive effort to enhance undergraduate education universitywide, the Upward Bound program did not have a full-time director or even a bureaucratic “home.” Whitney was a senior counselor at the Rutgers College Educational Opportunity Fund before moving to the Upward Bound program.

His office is on the Livingston Campus, where Upward Bound students lived during previous summers. The program receives federal funding to bring students to campus from high schools in New Brunswick, Perth Amboy, and Plainfield. The Office of Undergraduate Education provided extra support this year to bring 16 additional students from Orange, Franklin, Edison, Neptune, Long Branch, Scotch Plains, Piscataway, and Somerset to expand the reach of the Upward Bound program to students from across the state.

Applications are open to rising ninth and tenth graders who are the first generation in their families to attend college or demonstrate financial need. They must have at least a “C” average.

Melvin Gonzalez, a senior from Perth Amboy High School who has been in the program since the ninth grade, said there was increased freedom this year along with greater demands, similar to those placed on college students. Living on College Avenue offered access to more entertainment and contact with other students.

“We’re starting to get more of the college life,” Melvin said. “There is so much more freedom, but a lot more work. We’re getting the responsibilities and perks of being a college student” – like going for a smoothie at Au Bon Pain virtually anytime he wanted.

It can be like a whole new world for some of the younger students. Ankrah said the freedom allowed her to do things like visit the Zimmerli Art Museum or go to the computer lab anytime she liked (as long as there was no class or programming and it was before the 11 p.m. curfew).

Resident mentors helped the students manage their time, find their way around campus, and adjust to living away from home in Brett Hall. The mentors are undergraduate students at Rutgers, and more than 76 applied for the 13 positions this year.

Some aspects of the Upward Bound program replicate those ideas found in learning communities. After classes are over for the day, the students are not just left to their own devices: there is programming in the dorms, ranging from talks on gay and lesbian issues to discussions of the management of finances and credit cards in college. The SCREAM Theater troupe visited the students this year, and SAT and college application preparation are a requirement of the program.

It’s all in line with the effort to prepare students for the college experience and give them an idea of what to expect. “Here I really feel like we’re taking college-level courses,” Melvin said. “In my writing class we’re reading college-level texts. I feel challenged not just by reading the texts but by looking beneath the surface.”