Beyond paper, Writers House explores digital side of literary and creative work

Despite its emphasis on multimedia, image, video, and sound, Writers House was purposely named.

"We really wanted to emphasize that Writers House is about a level of sophistication, complexity, and commitment to both clear and elegant expression regardless of the media you are working in," said Richard Miller, chair of the Department of English in New Brunswick. “We want students to have a place where they can learn to express themselves in the most powerful media of the 21st century.”

Writers House offers traditional creative writing classes – in poetry, fiction, drama, and creative non-fiction – like similar learning communities at other institutions of higher education. But the creators of Writers House in New Brunswick wanted to integrate digital media with the disciplines of creative writing.

Rutgers alumnus Thomas J. Russell, along with his daughter, who is interested in forward-looking creative writing environments, agreed. He helped to develop the vision of a center for 21st-century writing across all media. With a $500,000 gift, Russell made it possible for Writers House to begin operation this fall. Faculty and administrators at Rutgers developed a detailed plan, including renovations to the ground floor of Murray Hall on the College Avenue Campus, and high-end equipment for a computer classroom.

Russell is Chairman of the Board of Directors of Emcore, a fiber optics and terrestrial photovoltaics company. He graduated from Rutgers College and received his Ph.D. in physiology and biochemistry from the Graduate School in New Brunswick.

Writers House gives off a literary aura – wood paneling, soft lighting, and earth-toned walls. The community features three seminar rooms, a digital composition “collaboratory,” a warm-toned student lounge, and offices for two Russell Teaching Fellows, who specialize in documentary film and whose hires were made possible by Russell’s gift. 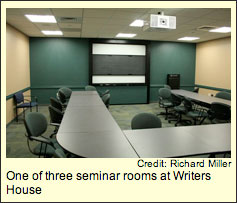 “The feeling we wanted to produce as we were designing is that you step into the house and feel like you are somewhere else,” Miller said. He referenced the report of the Task Force on Undergraduate Education, which found that students were in urgent need of suitable study spaces in academic settings. “We devoted a significant amount of space to a student lounge,” Miller said.

The “collaboratory” is a special computer lab designed for students to work in groups of two to four on digital media projects. The idea: to use collaboration as part of a creative process. “Students today don’t really need much help learning how to use this stuff,” Miller said. “As educators, we assist them in finding ways to improve the quality and importance of what they are expressing.”

Writers House celebrates its opening with an October 3 dedication ceremony. The English department also inaugurates the Writers from Rutgers series that day, with a reading by Evie Shockley, an assistant professor of English and acclaimed poet.