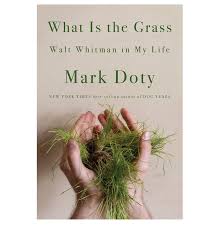 ease join us as we speak to Rutgers professor, poet, and essayist, Mark Doty, about his newest publication, What Is the Grass: Walt Whitman in My Life.

The conversation will be led by Joyce Carol Oates, a world-renowned writer and visiting professor for Rutgers English and Associate Professor of English, Dana Luciano.

Mark Doty is the author of over a dozen books of poetry and prose, including Fire to Fire: New and Selected Poems, winner of the 2008 National Book Award for Poetry. His eight books of poems and four books of nonfiction prose have been honored by the National Book Critics Circle Award, the PEN/Martha Albrand Award for First Nonfiction, the Los Angeles Times Book Prize, a Whiting Writers Award, a Lila Wallace-Reader’s Digest Writers' Award and, in the United Kingdom, the T.S. Eliot Prize. He has received fellowships from the Guggenheim Foundation, the National Endowment for the Arts, the Ingram Merrill Foundation, and the Dorothy and Lewis B. Cullman Center for Scholars and Writers at the New York Public Library.

Joyce Carol Oates is a recipient of the National Medal of Humanities, the National Book Critics Circle Ivan Sandrof Lifetime Achievement Award, the National Book Award, and the PEN/Malamud Award for Excellence in Short Fiction, and has been several times nominated for the Pulitzer Prize. She has written some of the most enduring fiction of our time, including the national bestsellers We Were the Mulvaneys, Blonde, which was nominated for the National Book Award, and the New York Times bestseller The Falls, which won the 2005 Prix Femina. Her most recent novel is My Life as a Rat. She is the Roger S. Berlind Distinguished Professor of the Humanities at Princeton University and Visiting Professor at Rutgers University. She has been a member of the American Academy of Arts and Letters since 1978.

Dana Luciano is Associate Professor of English and Women's & Gender Studies at Rutgers University, where she teaches courses in queer studies, environmental humanities, and nineteenth-century American literature. Recent publications include Unsettled States: Nineteenth-Century American Literary Studies (NYU Press, 2014), co-edited with Ivy G. Wilson; “Queer Inhumanisms,” a special issue of GLQ: A Journal of Gay and Lesbian Studies, co-edited with Mel Y. Chen (spring/summer 2015); and essays in American Literature, J19: The Journal of Nineteenth-Century Americanists, and Reading the Anthropocene: Literary History in Geologic Times (Penn State University Press, 2017). She is currently at work on two monographs: How the Earth Feels: Geological Fantasy in the Nineteenth Century U.S., and Time and Again: The Affective Circuits of Spirit Photography.