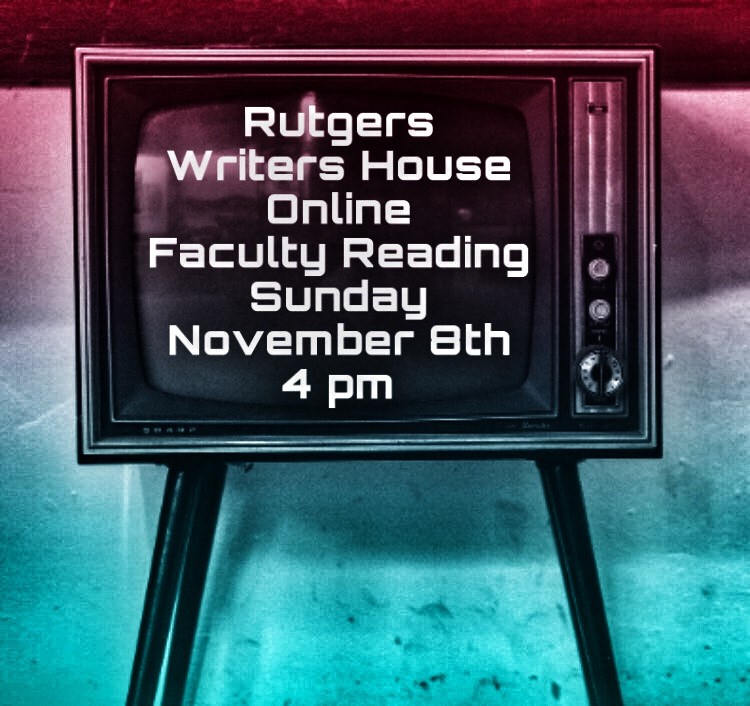 Rutgers New Brunswick’s Writers House invites you to an afternoon of poetry, fiction, and screenwriting with our creative writing faculty.

ALEX DAWSON's forthcoming memoir, Room to Swing an Axe, about growing up in 80's Alabama, has been called "a Johnny Cash song directed by Steven Spielberg," and his novel, Welcome to White Hart, has been called "Charlotte's Web meets Winter's Bone." Both books are due out next year. He is currently working on a novella about zombies and mud-bogging called Deep in the Jeeps of Georgia.

LINDSAY HABER teaches Intro to Creative Writing and Fiction for Writers House. Her work has appeared in McSweeney's, Glimmer Train, The Normal School, Booth, and elsewhere. Find more of her work at Lindsay-haber.com

JOANNA FUHRMAN is the author of five books of poetry, most recently Pageant (Alice James Books 2009) and The Year of Yellow Butterflies (Hanging Loose Press 2015). Recent poems and poetry videos have appeared in Conduit, Fence, NAW, Moving Poems, The Rumpus,Triquarterly, Posit, and Volt. Her sixth book of poetry, To a New Era, is forthcoming this Spring.

JOHN HULME is a writer/filmmaker from Highland Park, NJ. He is co-author of The Seems -- a trilogy of fantasy novels from Bloomsbury Children’s Books -- and director of Unknown Soldier: Searching For A Father, a feature length documentary for HBO. He is currently producing videos for the ACLU as part of the fight to end the practice of solitary confinement in American prisons. Hulme's first feature length horror screenplay, Bagman, is being directed for Lion's Gate by Colm McCarthy of Peaky Blinders and The Girl With All The Gifts.

YEHOSHUA NOVEMBER is the author of two poetry collections, God’s Optimism (a finalist for the Los Angeles Times Book Prize in Poetry) and Two Worlds Exist (a finalist for the National Jewish Book Award and the Paterson Poetry Prize). His work has been featured in The New York Times Magazine, Harvard Divinity Bulletin, The Sun, Virginia Quarterly Review and on National Public Radio.

EVAN REHILL's collected fictions, Night Comes Later, will be published in 2021 by Like Literally Press. His work has appeared in American Short Fiction, Open City, No Tokens, The Literary Review, elsewhere. He is currently directing Michael McCanne's play Stalingrad, or Saturn Returns (winner of the New Jewish Fellowship grant, 2020). He lives with his wife in NYC.

REBECCA REYNOLDS is the author of two books of poetry, Daughter of the Hangnail (New Issues Press) and The Bovine Two-Step (New Issues Press). Her poems have appeared in numerous online and print publications, including Journal of New Jersey Poets, American Letters & Commentary, Third Coast, Quarterly West, Boston Review of Books, Web Conjunctions, The Spoon River Poetry Review, Notre Dame Review, the Literary Review and others. She works as an assistant dean at Rutgers and teaches Creative Writing and Women's and Gender Studies courses.