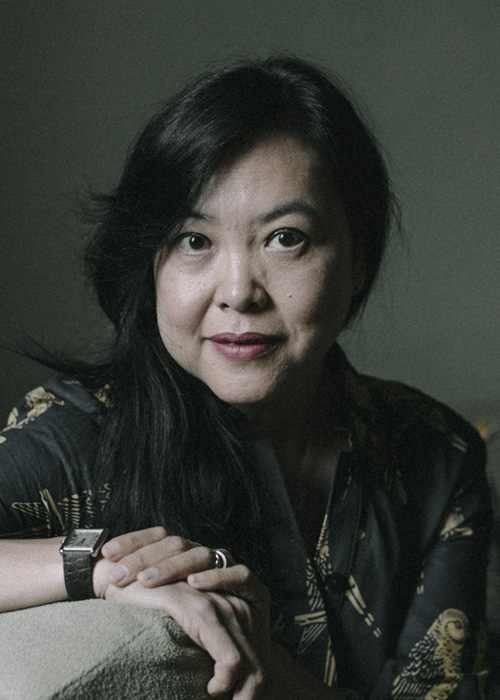 Born in Saigon, South Vietnam, Monique Truong came to the U.S. as a refugee in 1975. She is a writer based now in Brooklyn, New York.

Her second novel, Bitter in the Mouth (Random House, 2010), received the American Academy of Arts and Letters’ Rosenthal Family Foundation Award and was named in 2010 as a 25 Best Fiction Books  by Barnes & Noble, a 10 Best Fiction Books by Hudson Booksellers, and the adult fiction Honor Book by the Asian Pacific American Librarians Association.

Her third novel, The Sweetest Fruits, will be published by Viking Books on September 3, 2019.

Truong is the editor of Vom Lasterleben am Kai (C.H. Beck, 2017), a collection of reportage by Lafcadio Hearn, a.k.a. Koizumi Yakumo, the subject of her novel The Sweetest Fruits. She is also a contributing co-editor of Watermark: An Anthology of Vietnamese American Poetry & Prose (Asian American Writers’ Workshop, 1998).

In collaboration with the composer/performer/soundartist Joan La Barbara, Truong has written the lyrics for a choral work, a song cycle, and is at work on a libretto for an opera inspired by Joseph Cornell and Virginia Woolf.

A Guggenheim Fellow, U.S.-Japan Creative Artists Fellow in Tokyo, Princeton University’s Hodder Fellow, and a Visiting Writer at the Helsinki Collegium for Advanced Studies, Truong was most recently the Sidney Harman Writer-in-Residence at Baruch College in the Fall of 2016.
She has been in residence at Djerassi, Akrai Residency, Civitella Ranieri Foundation, Lannan Foundation, Yaddo, MacDowell Colony, Hedgebrook, Ucross Foundation, Sea Change Residency, Liguria Study Center for the Arts and Humanities (Bogliasco), Fundacion Valparaiso, Ledig House International Writers’ Residency, and Santa Maddalena Foundation.
Truong serves on the Board of Directors of the Authors Guild as a vice president, the Creative Advisory Council for Hedgebrook, the Bogliasco Fellowship Advisory Committee, and the Advisory Committee of the Diasporic Vietnamese Artists Network. For PEN America, she was the Chair of the Literary Awards Committee (2014-2017) and a member of the Advisory Council.
Truong is also an intellectual property attorney, but she hopes that you will not hold that against her. When she is not writing, which is most of the time, she cooks and takes naps. She lacks many basic life skills such as knowing how to drive a car, ride a bicycle, and has only recently learned how to read a map. She has been known to walk long distances, especially if there is a very good bakery located at the end of that walk. The only thing that she really likes to exercise is her right to vote, and she hopes that her fellow Americans will make a better, kinder, more intelligent decision in 2020.