Jennie Livingston, award winning filmmaker of Paris is Burning and Who's The Top, is the next Writers House Master Class guest artist. On March 4, from 5 – 6 PM in Murray Hall 302, Jennie Livingston will show clips from her new film, Earth Camp One as well as discuss the film and narrative process in filmmaking with Richard E. Miller, Chair, Department of English.

Then, Livingston's feature length documentary, Paris is Burning, will be screened beginning at 6:30 PM, in Trayes Hall, on the Douglass Campus. Immediately following, Jennie will discuss the making of Paris is Burning, present her short fiction film Who's The Top, and answer audience questions.

We hope you will join us for this event filled day with an amazing artist. 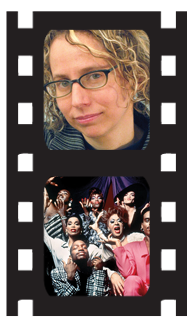 For more information, please contact This email address is being protected from spambots. You need JavaScript enabled to view it.

Jennie Livingston, independent filmmaker and director of Paris is Burning, Through the Ice, Who’s the Top? and the upcoming feature Earth Camp One is available for talks, screenings and lectures. Educated at Yale, Livingston has taught at Brooklyn College, Yale, the School of Film and Television in Munich, and has spoken about her work at dozens of American and international festivals, universities, and cultural institutions. Her films have received awards from the Sundance Film Festival, the New York and Los Angeles Film Critics’ Associations, The Independent Feature Project, The Berlin Film Festival, and the Toronto International Film Festival, and have been seen on every continent -- in theaters and on television. Known for addressing difficult topics, (class, race, gender, sex) and making them accessible, Livingston is a recipient of fellowships from the Guggenheim Foundation, the German Academic Exchange (DAAD), the Getty Center, and the National Endowment for the Arts. Livingston believes that good filmmaking is about synthesizing three things: 1) a commitment to the art and craft of cinema 2) a passion for telling stories that are so specific they address universals and 3) a dedication to the practice of thinking, looking, and listening deeply.